No maintenance needed: Flexible circuits that can repair themselves with liquid metal

The ability of our skin to heal itself after being damaged has amazed most of us for a long time. The skin can withstand being cut, bended, and stretched without losing any of its functions by undergoing a process of self-healing. Could flexible electronic devices, such as the widely demanded E-skin, ever have self-healing properties? A research team including Prof. Chan-Moon Chung from Yonsei University and Prof. Minwoo Park from Sookmyung Women’s University has been working with that goal in mind.

Currently, flexible electronics are in high demand because of their great number of potential applications in the medical, environmental, and consumer fields. Stretchable and biocompatible electronic devices could be used for advanced diagnosis systems. However, subjecting a flexible electronic device to the same mechanical stresses that the skin undergoes in daily life results in the degradation of its performance because the conducting paths get damaged and eventually break. “The self-healing of such materials is important because recovery of the electrical and mechanical properties of damaged sites would lead to excellent device durability,” explains Prof. Chung. 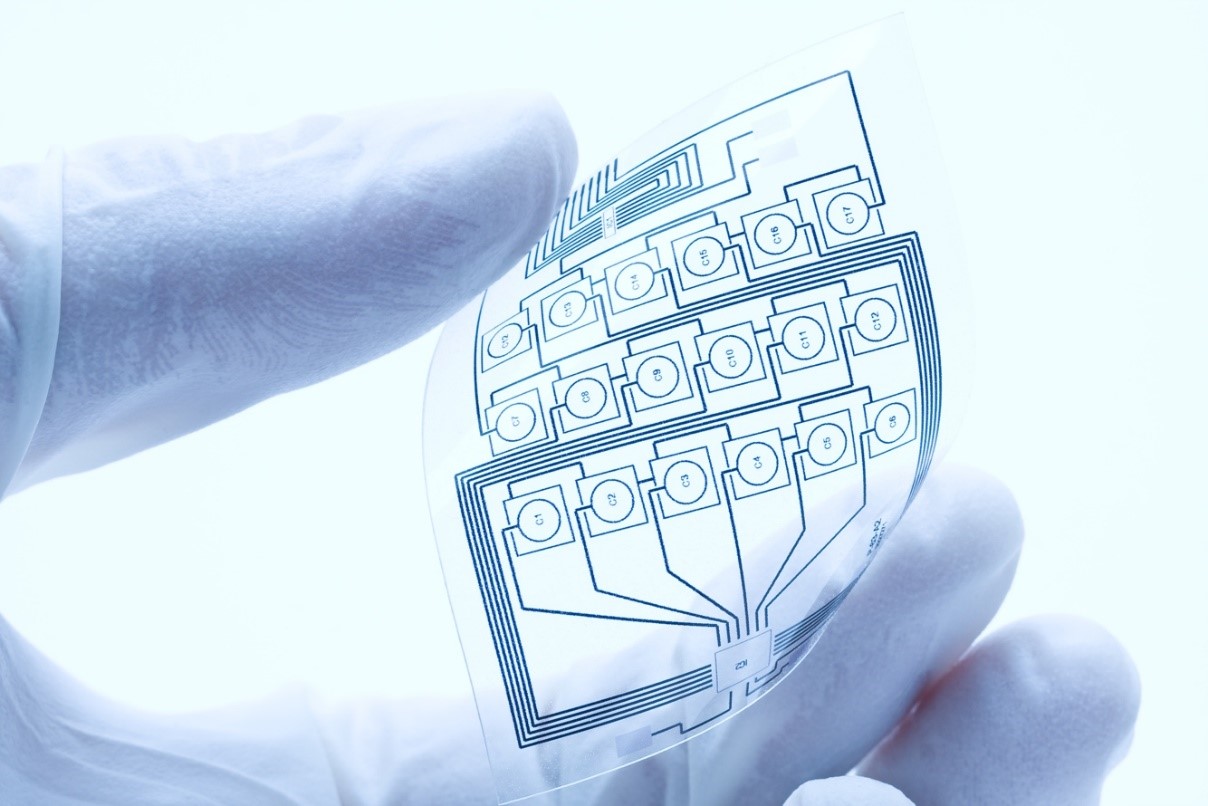 With flexible devices high in demand, researchers have developed a method that enables damaged flexible circuits to self-heal broken conducting path; this could result in huge improvements in the reliability and service life.

Motivated by this, the team explored deeper into an idea that had been tried before. Passivation layers in electronic circuits generally consist of a thin coating layer that is applied on top of the conducting paths to protect the metals from corrosion and damage. By adding capsules or tubes filled with liquid metal within the passivation layer, previous researchers managed to get damaged conducting paths to self-heal after suffering mechanical damage because these capsules break and drop their liquid metal onto the damaged sites, thereby restoring the conducting path. However, they used capsules and tubes of considerable size, which limited the self-healing capacity of the circuits tested.

Believing that the use of smaller liquid metal capsules was key to improving the self-healing capabilities of flexible devices, the team created a flexible solar-powered smart watch to test their idea. This watch contained flexible solar cells with conducting paths that were covered with a passivation layer mixed with capsules with a diameter of less than 10 µm. The researchers cut these paths with a blade and measured their electrical properties over time to check if the liquid metal from the capsules would reach the damaged sites and restore the performance of the device. The results obtained were excellent, with the properties of the device barely changing after the damage had been healed, which took less than five minutes.

What’s more, the team also demonstrated the high mechanical stability of their flexible watch. They performed bending tests and showed that the proposed self-healing method is very reliable. This is so because the liquid metal used turns to a solid when in contact with the conducting paths, permanently restoring the damaged areas. “This novel healing system could be promising for more sustainable electronic devices with increasing defect tolerance, improved circuit reliability, and extended service life,” concludes Prof. Chung. The findings of this study are a step in the right direction for durable flexible electronics, which will likely take the world by storm in the near future.