Certain microbes thriving in soil near the roots of the tomato plant that can resist bacterial wilt were found to inhibit the disease development and progression.

Pathogens, pests and weeds are big problems when cultivating crops. Plant diseases can cause serious economic losses to major crops, such as rice blast and bacterial blight, and can lead to great socio-cultural aftermath, such as a potato blight that has brought massive overseas migration to Ireland.

Understanding plant disease resistance is essential for preventing and treating plant diseases. In plant pathology, plant defense has been known to occur when a protein made from a resistance gene detects the invasion of a pathogen and various inhibitory substances are formed to attack the pathogen.

To investigate the possibility that plant microbiome may be involved in plant disease resistance, they set out in 2011 to collaborate on a tomato variety that is resistant to bacterial wilt. The disease causes enormous damage to hundreds of crops such as tomatoes, potatoes, and peppers.

The pathogen Ralstonia solanacearum enters the plant through the root and, even if the diseased plant is removed, it remains in the soil for long. It is a very important pathogen in quarantine, along with the fire blight pathogen, and is classified as a biologically active microorganism that is likely to be abused as a biological weapon in crop bioterrorism.

The researchers cultivated tomato varieties Hawaii 7996 (resistant to bacterial wilt) and Moneymaker (susceptible) in a soil mesocosm experiment to analyze the microbiota differences in the soil near the root called the rhizosphere. Drs. Min-Jung Kwak and Ju Yeon Song along with members of Prof. Lee’s laboratory examined the types, frequencies, and networks of microorganisms in 16S rDNA of the rhizosphere microbial communities and analyzed the types and frequencies of microbes and their genes in the metagenome, the entire DNA sequences.

As a result, they found that certain bacteria including Flavobacteriaceae were inhabited more in the rhizosphere of Hawaii 7996 than Moneymaker, and noticed the possibility that microbiota in the resistant plant-grown soil could prevent occurrence and progress of the disease in a microbiota transplant (or microbiota transplantation) experiment. 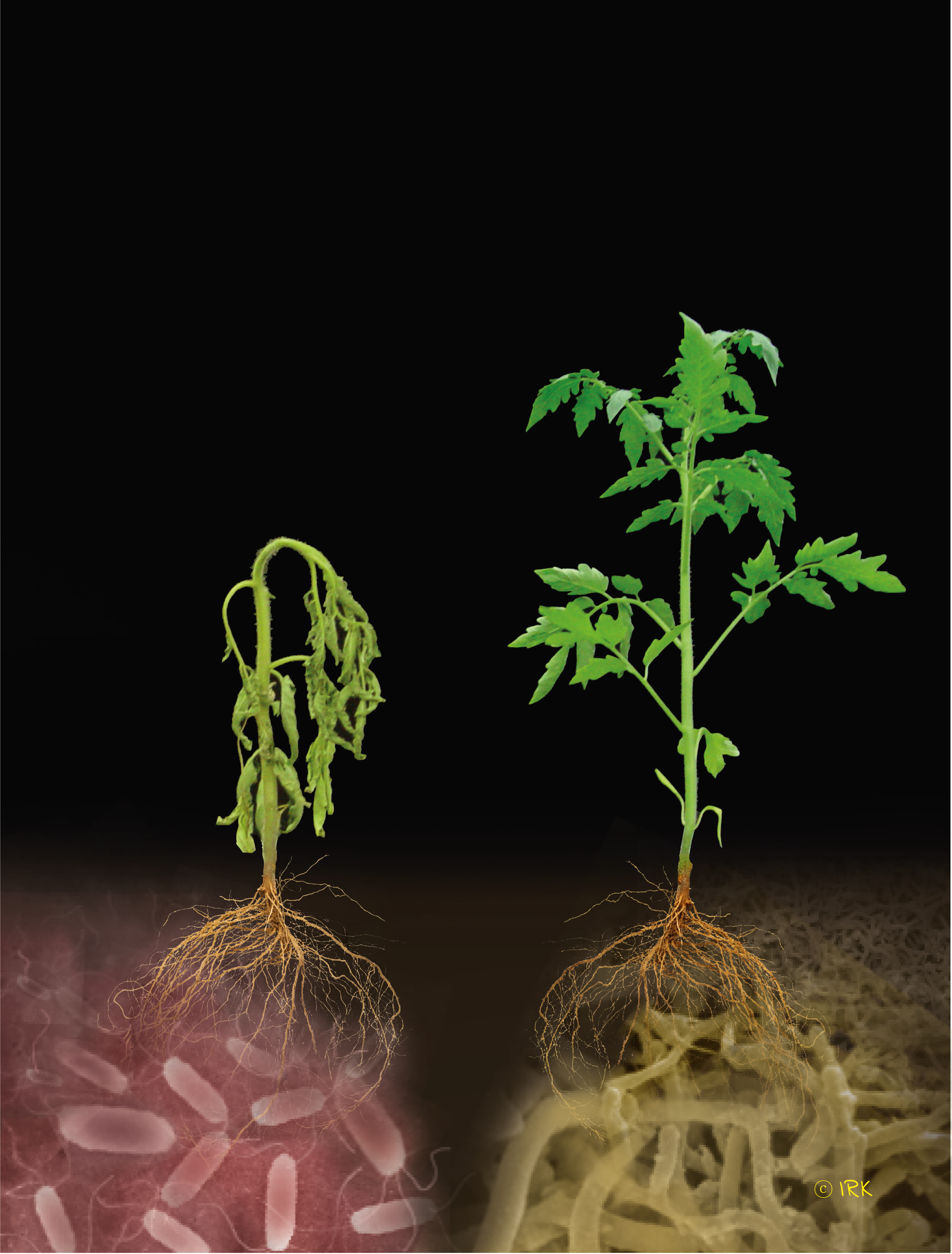 Dr. Kwak then analyzed the metagenomic sequences to investigate which microorganisms affect the disease occurrence in the tomato rhizosphere. A genomic draft of a bacterium, which has not been isolated and cultivated so far in the rhizosphere of resistant tomato varieties, was found to be much more numerous in Hawaii 7996 than Moneymaker.

Based on this, Jidam Lee succeeded in isolating a specific microorganism of a novel taxon that grows very slowly using various genomic information collected from the metagenomic data and named it TRM1. According to Drs. Kwak, Song, and Soon-Kyeong Kwon, it has a wealth of genes that may make the bacterium competitive in the rhizosphere.

In addition to the inoculation experiment of tomato pathogens in various conditions including concentration of TRM1, soil type, soil sterilization, etc., Dr. Kwon and Hyein Park as well as Prof. Lee’s people finally proved that TRM1 reduces the incidence and progress of bacterial wilt by monitoring the population changes of TRM1 and R. solanacearum in the tomato rhizosphere.

The research was highlighted by Senior Editor Susan Jones, covered by The Economist, and briefed in Nature Reviews Microbiology.

This study is the first to reveal the structure and function of the plant microbiome related to disease resistance, and it opens up a new era of phytobiome research as well as the development of a new generation of eco-friendly microbials dubbed ‘plant probiotics.’