A research team led by Yonsei researchers has demonstrated that a certain activated signal promotes the incidence of liver cancer from the initial stage.

TGF-β signaling is known as a major factor involved in liver cirrhosis, and active in most patients with cirrhosis. Ironically, TGF-β is known as a major tumor-suppressive signaling pathway that inhibits cell division and promotes apoptosis. Despite the tumor inhibitory role of TGF-β, it has long been a mystery for liver cancer researchers that cirrhotic patients with an elevated hepatic TGF-β signaling have a higher chance of liver cancer. 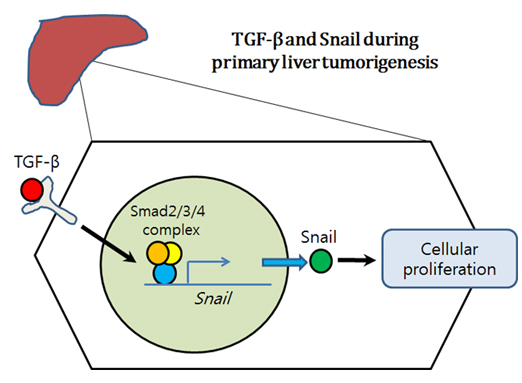 Previously, it has been known that expression of EMT inducers increases in the later stage of tumorigenesis, or at the time of metastasis, to promote the tissue invasion and metastatic capabilities of cancer cells. On the contrary, the research team demonstrated that the expression of the EMT inducer, Snail is induced by TGF-β in the initial stage of tumorigenesis, which promotes cellular proliferation in the liver.

Furthermore, the research team analyzed the pattern of gene expression in human liver tissues registered in the cancer database, and conducted an experiment of liver cancer tissue culture to confirm the applicability of the tumorigenic effects of TGF-β and Snail genes found in the mouse model to human liver cancer.

Professor Ro explained the significance of the research lies that “it shows how TGF-β signaling pathway induces tumorigenesis in the liver”. Also, he “expects future clinical application to prevent or treat liver cancer by targeting TGF-β or Snail genes.” The study was published on 2017 November issue of Gastroenterology, the foremost international journal in gastroenterology and hepatology.